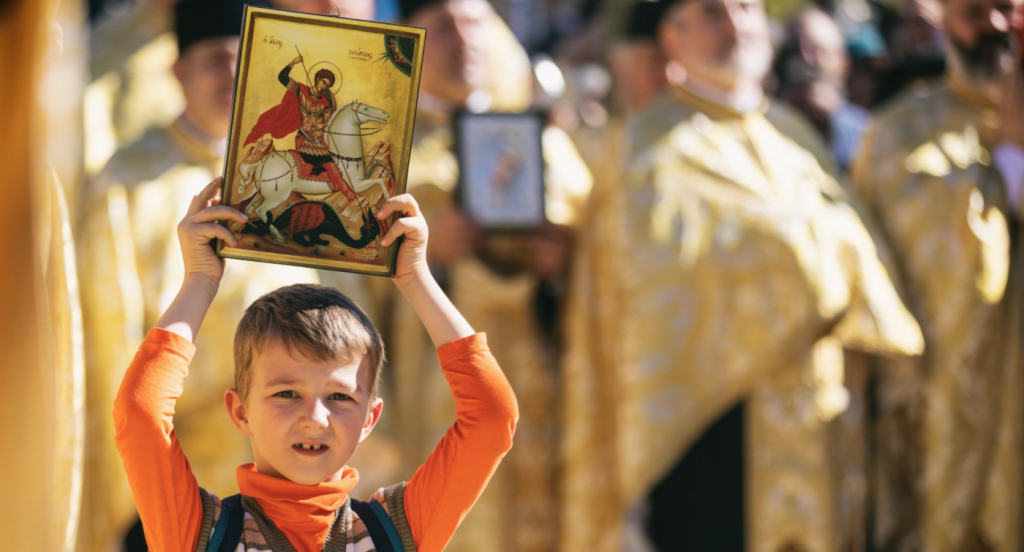 The Sunday of the Triumph of Orthodoxy is celebrated on the first Sunday of Great Lent. It is the celebration of the victory of the iconodules over the iconoclasts by the decision of the Seventh Ecumenical Council. Therefore, the service is to commemorate the restoration of icons for use in services and private devotional life of Christians. Services usually include a procession of icons around the Church. Orthodox Parishes, Monasteries, Cathedrals, and Chapels all over the world will be celebrating this important feast, and will be doing their own processions, just as we will.

Please be sure to bring your favorite icons, and for your children, icons of their patron saints! This will be a wonderful event, and we will be taking many photos! I can tell you from my own experience – miracles take place during this procession. The saints take bold action! The Lord is glorified! This feast firmly and visibly proclaims the faith of the Church as faith in Christ Incarnate!

The theme of the day is victory of the True Faith.

Despite the teaching about icons defined at the Seventh Ecumenical Council in 787, the iconoclasts began to trouble the Church again. After the death of the last iconoclast emperor, Theophilos, his young son Michael III, with his mother the regent Theodora, and Patriarch Methodios, summoned the Synod of Constantinople in 843 to bring peace to the Church. At the end of the first session, all made a triumphal procession from the Church of Blachernae to Hagia Sophia, restoring the icons to the church.  This occurred on 11 March, 843, which was the first Sunday of Lent that year. The Synod decreed that a perpetual feast on the anniversary of that day should be observed each year on the First Sunday of Great Lent, and named the day, “the Sunday of Orthodoxy”

Also, the icons of the saints bear witness that man, created in the image and likeness of God (Gen 1:26), becomes holy and godlike through the purification of himself as God’s living image.  The first Sunday of Great Lent originally commemorated the Prophets such as Moses, Aaron, and Samuel. The Liturgy’s alleluia verses and scripture readings appointed for the Sunday of Orthodoxy reflect this older usage.  The Epistle reading is a completion of Hebrews 11:24-26, 32-12:2. The yet-to-be-baptized catechumens of the early church heard the Epistle about the Old Testament men who lived by their faith in a promise whose fulfillment they did not see.

After the righteous of the Old Testament are mentioned, the Epistle says: And all these, having obtained a good testimony through faith, did not receive the promise, God having provided something better for us, that they should not be made perfect apart from us.

The Gospel lesson is John 1:43-51, and it ends with a explanation of the something better of the Epistle:

“You will see greater things than these.” And He said to him, “Most assuredly, I say to you, hereafter you shall see heaven open, and the angels of God ascending and descending upon the Son of Man.”

The catechumens of the early church, and the faithful preparing for Pascha today, are told that, with faith, they will see the inauguration of the new age, the fulfillment of all promises, and the manifestation of the Kingdom, through the Incarnation, in the Church.

In the evening, in areas like the United States where there are many jurisdictions, a Pan Orthodox Lenten Vespers service is also common, and a procession of icons also takes place then.