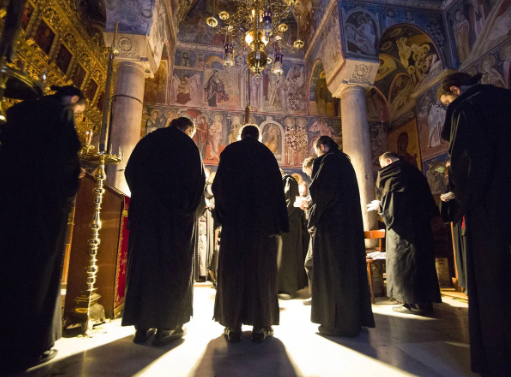 As is evident from the Holy Scriptures, bows, kneeling and prostrations were employed during prayer even in the Old Testament. The holy Prophet King David refers to bowing down to God or to His temple in many of the psalms, for example:

About kneeling, it is known that the holy Prophet Daniel, for example, thrice daily

Full prostrations are also mentioned in the books of the Old Testament. For example: the Prophets Moses and Aaron besought God,

to be merciful to the children of Israel who had grievously sinned. In the New Testament also, the custom of performing kneelings, prostrations and, of course, bows had been preserved and still had a place at the time of the earthly life of our Lord Jesus Christ, Who sanctified this Old Testament custom by His own example, praying on bended knees and failing down upon His face.

Thus, we know from the Holy Gospels that before His passion, in the Garden of Gethsemane, He

And after the Lord’s ascension, during the time of the holy apostles, this custom, of which the Holy Scriptures also speak, existed unchanged. For example, the holy Protomartyr and Archdeacon
Stephen

“knelt down,” and prayed for his enemies who were stoning him (Acts 7:60);

the Apostle Peter, before raising Tabitha from the dead,

It is an indisputable fact that, as under the first successors of the apostles, so even in much later periods of the existence of the Church of Christ, kneelings, bows and prostrations upon the ground were always employed by true believers at domestic prayers and at the divine  services. In antiquity, among the other bodily activities, kneeling was considered the outward manifestation of prayer most pleasing to God.

“Beyond the rest of the ascetic labors, kneeling has the power to assuage the wrath of God and to evoke His mercy” (Book VI on the Six Days of Creation, ch. 9).

The canons concerning bows and kneelings now accepted by the Orthodox Church and set forth in the books of the divine services, and particularly in the Church Typicon, are observed in monasteries. But in general, Orthodox Christian laymen who have zeal are, of course, permitted to pray on their knees in church and to make full prostrations whenever they wish,
excepting only those times when the Gospel, Epistle, Old Testament readings, six psalms and sermon are read. The Holy Church lovingly regards such people, and does not constrain their devout feelings.

However, the exceptions with regard to Sundays and the days between Pascha and Pentecost apply generally to everyone. According to ancient tradition and a clear church law, kneeling must not be performed on these days. The brilliant solemnity of the events which the Church commemorates throughout the period of Pentecost and on Sundays precludes, in and of itself, any external manifestation of sorrow or lamentation over one’s sins: for ever since Jesus Christ,

“blotting out the handwriting of the ordinances that was against us, … nailing it to His Cross; and having spoiled principalities and powers, He made a show of them openly, triumphing over them in it” (Col. 2:14-15)ever since then “there is, therefore, no condemnation to them who are in Jesus Christ” (Rom. 8:1).

For this reason, the practice was observed in the Church from the earliest times, beyond a doubt handed down by the apostles, whereby on all these days, in that they are consecrated to the commemoration of the glorious victory of Jesus Christ over sin and death, it was required to perform the public divine service brightly and with solemnity, and in particular without kneeling, which is a sign of repentant grief for one’s sins. The second century writer Tertullian gives testimony concerning this practice:

“On the Lord’s Day (i.e. Sunday) we consider it improper to fast or to kneel; and we also enjoy this freedom from Pascha until Pentecost” (On the Crown, ch. 3). St. Peter of Alexandria (3rd cent.cf. his Canon XV in the Rudder), and the Apostolic Constitutions (Book II, Ch. 59) also say the same thing.

Subsequently, the First Ecumenical Council found it necessary to make this legally binding by a special canon obligatory for the entire Church. The canon of this council states: “Since there are some persons who kneel in church on Sundays and on the days of Pentecost, with a view to preserving uniformity in all parishes, it has seemed best to the holy council for prayers to be offered to God while standing” (Canon XX).

Pointing out this canon, St. Basil the Great explains the rationale and meaning of the practice established by it thus:

“We stand up when praying on the first of the week, though not all of us know the reason. For it is not only that it serves to remind us that when we have risen from the dead together with Christ we ought to seek the things above, in the day of resurrection of the grace given us, by standing at prayer, but that it also seems to serve in a way as a picture of the expected age. Wherefore, being also the starting point of days, though not the first with Moses, yet it has been called the first. For it says: The evening and the morning were the first day (Gen. 1:5), on the ground that it returns again and again.  The eighth, therefore, is also the first, especially as respects that really first and true eighth day, which the Psalmist too has mentioned in some of the superscriptions of his psalms, serving to exhibit the state which is to succeed this period of time, the unceasing day, the day without a night that follows, the day without successor, the never-ending and unaging age. Of necessity, therefore, the Church teaches her children to fulfill their obligations to pray therein while standing up, in order by constantly reminding them of the deathless life to prevent them from neglecting the provisions for the journey thither. And every Pentecost is a reminder of the expected resurrection in the age to come. For that one first day, being multiplied seven times over, constitutes the seven weeks of the holy Pentecost. For by starting from the first day of the week, one arrives on the same day The laws of the Church have taught us to prefer the upright posture at prayer, thus transporting our mind, so to speak, as a result of a vivid and clear suggestions, from the present age to the things come in the future. And during each kneeling and standing up again we are in fact showing by our actions that is was through sin that we fell to earth, and that through the kindness of the One Who created us we have been called back to Heaven” (Canon XCI of St. Basil the Great).

The three well-known kneeling prayers of Pentecost composed by this great Father of the Church are thus not read at third hour, when the Holy Spirit descended upon the Apostles, nor at Liturgy on Pentecost, but at vespers, which is
already part of the following day, after the Entrance. The holy Father was determined not to break the ancient custom of the Church.

In Canon XC of the Council of Trullo, held in conjunction with the Sixth Ecumenical Council, we read:

“We have received it canonical from our God-bearing Fathers not to bend the knee on Sundays when honoring the resurrection of Christ. Since this observation may not be clear to some of us, we are making it plain to the faithful, that after the entrance of those in holy orders into the sacrificial altar on the evening of the Saturday in question, let none of them bend the knee until the evening of the following Sunday, when, following the entrance after the lamps have been lit, again bending knees, we thus begin to offer our prayers to the Lord. For, inasmuch as we have received it that the night succeeding Saturday was the precursor of our Saviors rising, we commence our hymns at this point in a spiritual manner, ending the festival by passing out of darkness into light, in order that we may hence celebrate the resurrection together for a whole day and a whole night.”

“Various canons have made it a law not to kneel on Sundays or during the fifty days of Pentecost, and Basil the Great also supplied the reasons for which this was forbidden. This canon decrees only with regard to Sunday, clearly indicates from what hour and until hour to kneel, and says: On Saturday, after the entrance of the celebrants into the altar at vespers, no one may bend the knee until vespers on Sunday itself, when, i.e., again the entrance of the celebrants takes place: for we do not transgress by bending the knee and praying in such a manner from that time on. For Saturday night is considered the night of the day of resurrection, which, according to the words of this canon, we must pass in the chanting of psalms, carrying the feast over from darkness to light, and in such manner celebrate the resurrection for the entire night and day” (Book of the Canons With Interpretations, p. 729).

There appears in the Church Typicon a direction concerning how the priest must approach and kiss the Gospel after reading it during the all-night vigil for the resurrection: “Do not make prostrations to the ground, but small bows, until the hand touches the ground. For on Sunday and feasts of the Lord and during the entire fifty days between Pascha and Pentecost the knee is not bent,” (Typicon, ch. 2).

Nevertheless, standing at the divine services on Sunday and on the days between Pascha and Pentecost was the privilege of those who were in full communion with the Church; but the socalled “penitents” were not dispensed from kneeling even on those days. We will close with these words from the famous interpreter of the Church canons, Theodore Balsamon, Patriarch of Antioch: “Preserve the canonical decrees, whereever and however they should be phrased; and say not that there are contradictions among them, for the All-holy Spirit has worded them all” (Interpretation of Canon XC of the Council of Trullo).